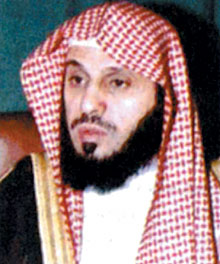 MAKKAH, 25 January 2004 — Sheikh Ayed Al-Qarni, the well-known Islamic scholar, has denied telling the press that it was permissible for women to drive cars in Saudi Arabia. Al-Qarni was responding to reports in Arab News and other papers published two weeks ago.

“I have recently stated that the issue of women not driving cars is not considered to be one of the basics of our religion. What I meant by that was that it is a subsidiary issue. The statement was used against me. It was then portrayed as if I had said it was permissible for women to drive cars in our country and this is something that is totally wrong,” he told Al-Madinah newspaper.

The sheikh said he did not understand how his statement to the press could have been misused when he made it clear that he would not allow his own daughters or sisters to drive.

Al-Qarni also said he mentioned clearly that such an issue should be brought up with the relevant religious institution. What he meant, he said, was that the senior Islamic scholars in the Kingdom had already issued fatwas (religious edicts) saying that women driving cars was sinful and not permissible in Islam. “My statements were misused. This is not the right way for those who search for the truth,” he said. He set out four statements as clarification:

“One: I do not see women driving cars in our country because of the consequences that would spring from it such as the spread of corruption, women uncovering their hair and faces, mingling between the sexes, men being alone with women and the destruction of the family and society in whole.

“Two: Sadd Al-Dharaie principle (the closing of doors which could lead to corruption or sinful actions) is one of the values in our religion. Women driving cars is a sinful thing. It is used by those who want to wage a war against purity and hijab.

“Three: One of the principles of our religion is protecting honor and moral values. Women driving cars would threaten these principles because of the dire consequences resulting from it.

“Four: Such public issues must be brought up with the certified religious institution who have the say in such matters as I have said many times before.”

This entry was posted by Mauro on January 30, 2004 at 10:39 am, and is filed under Críticas, Doideiras. Follow any responses to this post through RSS 2.0. Both comments and pings are currently closed.


Warning: count(): Parameter must be an array or an object that implements Countable in /home/liquidox/www/diario/wp-includes/class-wp-comment-query.php on line 399


Warning: count(): Parameter must be an array or an object that implements Countable in /home/liquidox/www/diario/wp-includes/class-wp-comment-query.php on line 399